Caution! Barbizon.io is an offshore company! Your funds may be at risk.

🔴 Barbizon.io was reported as a scam- a red flag! 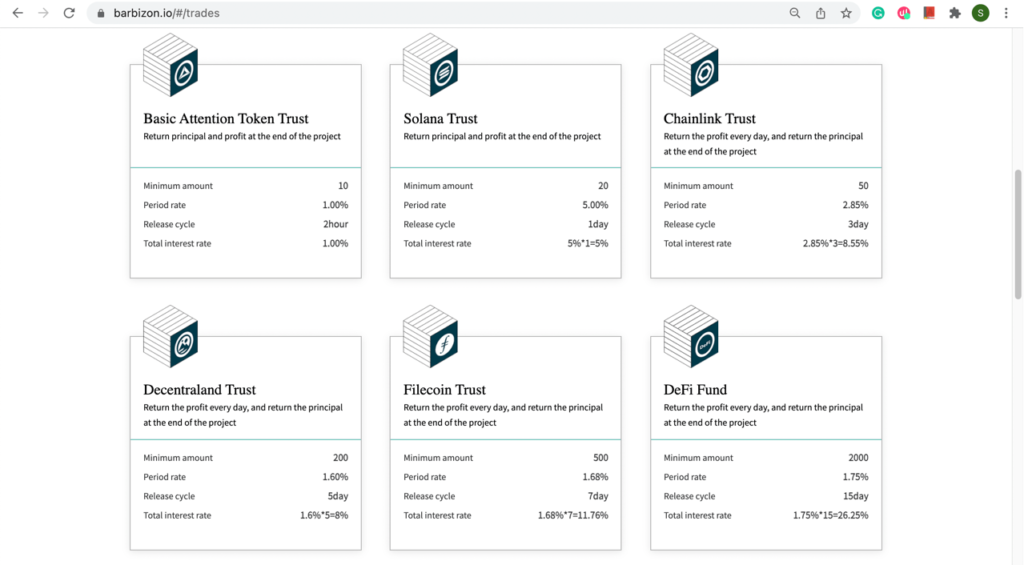 UPDATE: Our research check showed that Barbizon.io has changed its logo and added information about the actual investment plans. As you can see, Barbizon.io currently offer highly suspicious opportunities, such as 1% for 2 hours or 5% for a day. Such services can’t be regulated, so you’ll put money at risk if you invest there!

Cryptos went to become extremely popular, and they come with tremendous profit potential, but the assets are pretty complex and a bit enigmatic for the vast majority of people. Bitcoin is still surging, and the entire crypto market is growing exponentially, but all investments carry significant risks, such as high unpredictable volatility and absence of regulation, for example. And we’d also like to emphasize the fraud risk- crypto scams are virtually everywhere. In fact, the latest trend among scammers is to create fraudulent websites offering fictitious crypto investments and mining services aimed to entice unsuspicious investors into scam settings. The fraudulent offers usually stick to the rule “sounds too good to be true”, the entity offering the services is totally anonymous, and there is no regulation whatsoever. So, based on the products and services offered alone, we can affirm that the entity under review is dangerous. You’d better avoid it.

That said, it’s worth considering trendy cryptocurrency alternatives that have already proven to be reliable. For example, many cryptocurrency exchanges like Coinbase and Bitstamp already provide passive income opportunities like BTC and ETH staking, other earning opportunities, affiliate programs, so on and so forth. Both mentioned are law-abiding financial firms that operate transparently, so you won’t be exposed to fraud risks if you trust them.

UPDATE: Also, note that the logo of the so-called company is changed, too!

Barbizon.io is actually an impersonator as it claims to be a brand of Barbizon Finance- a company duly registered in Singapore that has nothing to do with the fishy Barbizon.io. The Singapore business is a management consultancy business that’s been around for more than 17 years, while Barbizon.io is just a freshly created website promising big!

And note another inconsistency- in the short video, they claim to have been found in 2018, which is basically a claim coming out of nowhere and for no reason. For one thing, they display an incorporation certificate that’s either forged or stolen and there you can see that Barbizon was incorporated in 2004. And on the other hand, the website alone is less than 2 months old, so nothing with Barbizon.io really adds up!

UPDATE: Barbizon.io has added corporate information, as well. It’s also cloning an Australian company founded in 2013 and they claim to be ASIC regulated! That’s not true! First of all, the Australian entity has nothing to do with the Singaporean one. And on top of all that Barbizon.io use the information of a Canadian company, which is also most likely impersonated. Beware!

So, the crypto service under review isn’t a typical firm, and as such, it’s not regulated. The absence of regulation implies that your investments will be at risk if you deposit. Moreover, you won’t have access to complaint procedures or money protection schemes, so if things go wrong, you’ll be the one to suffer the complete loss. Even more so, the digital coin transactions are anonymous, so if you get scammed by a shady crypto provider, you can’t get your money back.

Indeed, cryptocurrency regulation has been a hot topic for a long time. The digital coins themselves are not issued or governed by central banks, but too many countries already have plans to introduce centralized cryptocurrencies. Still, Bitcoin is a peer-to-peer payment system that’s considered too risky for many. However, many crypto firms are now operating with financial licenses; they are transparent, and their clients can benefit from certain customer protection measures if things go wrong. And that doesn’t apply to the entity under review, which is an anonymous and most probably totally illegal enterprise that can switch off its servers, pocket clients’ money and get away with the crime.

Barbizon.io shares no contact information except for the address of Barbizon Finance, which we already proved to have nothing in common with this fishy crypto scheme. Therefore, the fake contact information points that Barbizon.io openly misleads customers to gain confidence and also to remain anonymous and hard to catch. That’s most probably a scam!

Considering investment opportunities, transparency is always crucial. As for cryptos, you already know that Bitcoin is a peer-to-peer payment system, which is designed to protect the privacy and to provide security. However, that doesn’t mean that the crypto providers should also be anonymous. After all, these people will handle your money, so you should at least know who they are and where they operate from. In fact, we need to note that some trustworthy exchanges don’t reveal such information on their websites, but it’s still easy to verify that businesses are legal, law-abiding companies; therefore, it’s always a worrying sign if the crypto provider isn’t transparent.

Barbizon.io is not safe! It’s an impersonator aimed to scam as many people as possible, so make sure to avoid it or you risk losing money if you invest there.

Scammers are always riding the trends, so it’s not at the least surprising that cryptocurrency fraud is now blooming. Even more so, the high-tech nature of Bitcoin actually facilitates scams as most people don’t really know how crypto works, so scammers take advantage of the lack of understanding. Indeed, the crypto scam has been here for a while, and it proved to be extremely dangerous- just recall OneCoin, which happened to be a multi-billion Ponzi scheme disguised as a revolutionary digital currency. However, scammers rarely go out of their comfort zone, so most crypto scams happen to be very similar to the typical investment fraud.

The fraudulent crypto schemes are also anonymous and illegal, while scammers introduce themselves with fake identities. There are also too many impersonators resembling the websites of valid start-up companies from where customers get redirected to other insecure fishy payment portals that may as well carry additional security risks. The cons yet again promise the moon and the stars to their victims but won’t deliver a thing in the end. However, the difference between crypto and the rest of the investment scams is that people are more likely to believe that they can become rich overnight as Bitcoin has already proved to have massive profit potential. In any case, you should be very cautious when it comes to crypto, as the markets are plagued by scammers ready to take advantage of you.

Share your experience with Barbizon.io and get help to recover your deposit

Oanda FxTrade Review – Is fxoanda.net a Scam or Safe?

Markets Pilot Review – Is marketspilot.com a Scam or a Safe Forex Broker?

Blu Exchanger Review – Is blu-exchanger.com a Scam or Safe?

Coinminer.icu Review – Is Coinminer a Scam or Safe?

Joyce Bii: This happened to me also I paid the 500usdts they wanted to ..

Megha: can you please share the customer number with me..I would li ..

Oanda FxTrade Review – Is fxoanda.net a Scam or Safe?

Markets Pilot Review – Is marketspilot.com a Scam or a Safe Forex Broker?